Buying, and Karma, and Searching! Oh, my!

Rather than pick another of the community supplied robots that come with the EV3 software, I wanted to build a Rubik's Cube solving robot. It just so happens there is a fantastic project already available that creates one from just the 31313 EV3 parts - the MindCub3r created by David Gilday. Awesome :)

Over at mindcuber.com they have freely available designs for a Rubik's Cube solving robot for either the NXT 2.0 or EV3 LEGO sets. The MindCub3r for EV3 can solve it in about 1.5 mins.

This is not to be confused with the Cubestormer 3 which recently made the news for breaking the world record time for cube solving (human or machine) in 3.253s. It achieves this with multiple EV3 sets, who knows how many sensors, and runs software on an Android phone.

The first three components might be new to some Mindstorms users. However, the MindCub3r website has very clear instructions on how to install and run everything.

Update - The software now works with the standard 1.06H firmware version, so this section is no longer relevant but I'll leave the original text below. There is also a new Brick App program to load as detailed on the MindCub3r website.

Before starting, I was on the 1.06H firmware version. Unfortunately, this version has a problem with the way the Color Sensor runs in RGB mode which is why a special version was built - 1.05M. This was possible as LEGO released the source code of the brick.

The fact that I'm replacing 1.06 with 1.05 is not a problem, and the standard firmware can easily be restored afterwards by following the same procedure. 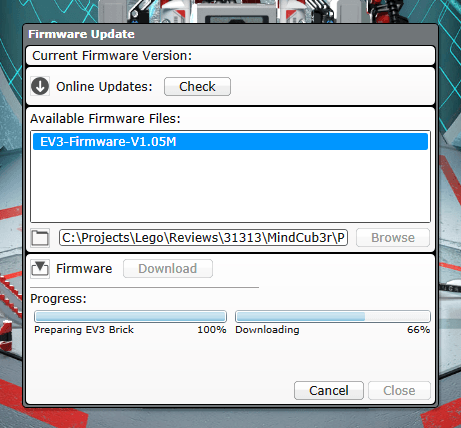 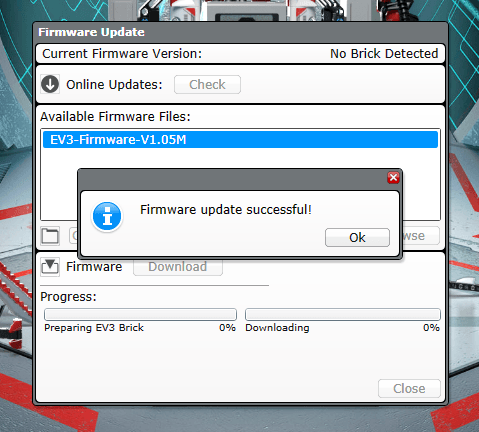 One gotcha is that the Mindstorms application will automatically detect that you are on an older version and remind you to update it!

The building instructions come in a PDF with computer generated instructions. While they look great, there were a few quirks that made it hard to follow sometimes. The bottom framework structure was quite weak and put together in a strange order at first. Eventually it was built up enough to be quite strong and stable. There were also cases where the part placements were not visible in the images, but rather had to be placed behind it. Basically, it ended up with several mistakes in the build that caused the robot to malfunction. More details on this later.

Despite any building difficulties, the completed build is quite impressive. The four sideways mounted tyres are necessary for keeping the model in one place. While it's operating it can be flung back and forth quite a bit, so the rubber really helps.

The flipping/tilting arm is a clever design – it uses a single large motor. The motor rotates one way to start the flip, then rotates back to it's starting position to complete the flip. No extra movements are required to reset the arm ready for the next flip - all part of making it solve the cube in a pretty fast time.

The cube's rotating platform has about a 3mm gap around each side of the cube. So when it's rotated, needs to go a bit more than 90 degrees, to ensure the cube has fully turned, then it rotates back again to even up the platform. This is a bit of a wasteful movement, but is necessary since the cube needs the gap to flip properly.

The color sensor moves a lot, back and forth to measure the side and corner cubes properly. I wonder if there is a way to avoid this and have it positioned to get both types clearly. That would make scanning much faster, although I presume the designer tried to figure that out.

You must get the build absolutely correct, or it will simply not work. I certainly didn't get it working first time, so here are the steps I went through.

One more thing to watch out for is the starting position of the flipper arm. If you set it manually make sure it is rotated fully towards the cube, not away from it - so that it is aiming up at a high angle instead of flat. If you set it wrong when it tries to flip the cube, the force of the motor can pull the whole thing apart. Check out the end of the video clip below for one example.

MindCub3r can solve the Rubiks Cube from any starting position in no more than about 100 secs from what I measured. Of that, approximately 30 secs is required to scan the cube and then up to about 60 secs to solve it depending on how many moves are required.

The algorithm to solve the cube is built into the compiled MC3Solver code. I asked for the source code to it, but there are no current plans to release it. It uses a home-grown method that turns out to be very fast and efficient, especially considering the fairly low amount of memory available (~3MB of RAM). It solved most of my cubes in ~20-24 moves, which is very close to the official minimum.

Personally I can solve the cube in about 1.5 to 2 mins, but using far more moves. In timed tests, I never managed to beat MindCub3r though :)

Opening up the Mindstorms Project reveals a fairly simple looking program - at first.

The light blue blocks represent other custom programs. The entire program consists of many custom blocks, in fact it is written in a highly modular fashion. This makes it quite easy to understand and the code neat and intuitive.

As an aside - I had to upgrade the main Mindstorms software while writing this review to v1.1.1. I'm not sure what the differences are as there doesn't seem to be a public change log. What is annoying is that you always need to download the entire 600+MB installer, instead of a simple patch.

The top row is simply initialising the program, and the second row is a loop that solves the cube over and over again. In fact, the entire scanning and solving code lies behind the single block with the image of a brain and cogs called ScanAndSolve.

The ScanAndSolve program contains most of the program flow for scanning the cube; sending the colors to the MC3Solver program; reading the list of moves from MC3Solver; and then applying those moves. The first custom block is the ScanCube program:

You can see that the ScanCube program simply calls other programs six times to scan each cube face. Inside those programs there are yet more calls to custom programs to scan the different types of edge/corner cubes.

The Solve program calls SendColorsRGB which writes the list of 54 cube face colors to the file mc3dat. This triggers the MC3Solver program which has been running constantly in the background to calculate the moves to solve the cube. When it's figured that out a few seconds later, it writes the moves back to the mc3dat file. The Solve program then reads from the file and stores the move commands in the arrays (mv_faces, mv_turns, mv_cut).

The ApplyMoves program then goes through the arrays and makes the moves one at a time. How it does this is probably the most confusing part of the program - with lots of nested Switch Blocks. One thing I don't like about the Mindstorms Software is that it will only show you one branch at a time - either the true or false branch must be selected for display/editing. This makes it particularly torturous to understand the nested Switch logic. Eventually each move comprises of a Spin and/or Tilt then a Turn.

I think this MindCub3r robot is awesome. I've always been fascinated with the Rubik's Cube puzzle since I was a kid. Being able to create a robot to solve the puzzle was a lot of fun. It is obvious that a lot of time and skill has gone into creating this MindCub3r project.

Not only is the MindCub3r a lot of fun, but it is also a great learning tool. By reading its code and truly understanding what it's doing, you can learn a lot of great techniques for programming your own robots.