Time to see what happened in 2017 and play with some numbers!

The volume of traffic received in 2017 was fairly close to 2016, with a much smaller growth compared to previous years.

An interesting stat that I'm now tracking is that only about 10% of visitors have accounts and login. However, 50% of the total page views come from those 10% logged in users.

In addition to the web pages, the API provides access to the database for external apps/scripts/websites/etc. I only keep a month's worth of stats for the API calls, but in the last month there were over 1M calls! It gets used quite heavily, although a disturbingly large number of those calls are for the v2 API which is about to be turned off. They've had a year to switch to v3 with monthly email reminders that it's happening. So if you are one of the v2 users, update your app now!

The top 5 countries are:

Interestingly China and South Korea come in at #6 and #7, mostly from their social media sites and search engines. It makes me wonder if it's worth the effort to add translations for some extra languages, perhaps that will increase the site's usefulness in those countries.

The top 5 Cities by number of visitors are:

No real surprise seeing big cities at the top of the list, but Budapest and Melbourne seem a little out of place. I guess there are large LEGO communities there.

This looks pretty much the same as for 2016. The mobile (29%) and tablet (12%) usage is about the same as 2016 too which is surprising given it was increasing at a steady rate for years.

I like to look at outliers, and some interesting things I noticed: 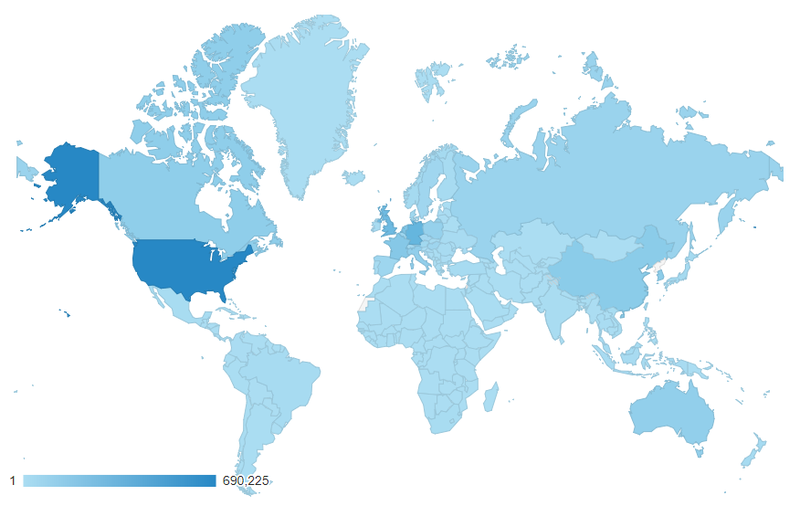 Referrals made up about 25% of the total traffic (i.e. coming via a link on an external site). The top 5 referral sites for 2017 were:

Fairly normal, except for Youtube making an appearance that hasn't been up there in previous years.

Historically, I haven't made much use of social media for Rebrickable. Mostly because I don't use it for personal stuff either, so it's a bit of a mystery to me :) For the last few months at least, I've put in more of an effort to use them and posted plenty of MOCs and things on Facebook, Twitter, etc.

I'm sure I'm not using it very effectively, but the number of followers continue to grow throughout 2017:

Facebook seems to be the only one that actually directs regular traffic to the Rebrickable website, and I can't tell if that is from my posts or other peoples pages/links. I would guess it's from others more so than mine. Reddit tends to only send massive spikes that kill performance for a few hours, and then nothing for months at a time.

With the introduction of v3's more advanced features, and more frequent build calculations, I've spent a considerable amount of time this year fighting and fixing performance problems. To give you a sense of what that means, I spend a lot of time staring at this every day: 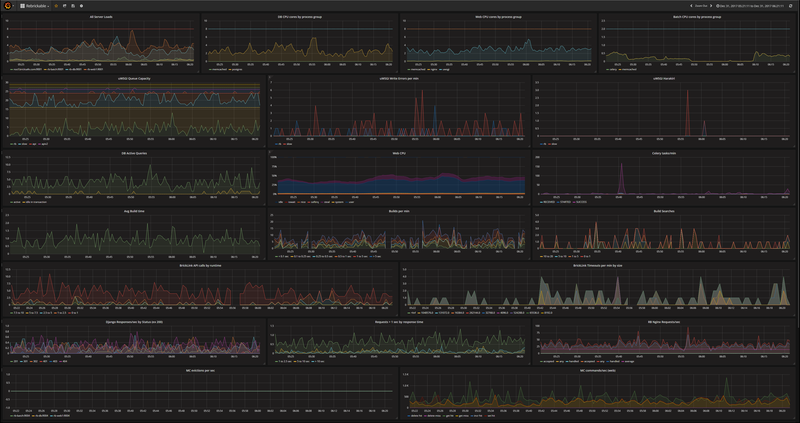 For those that care, it's a Grafana dashboard using a Prometheus server backend. I collect stats from all servers and then query those stats to display the charts of interest. I can dive deeper into any stat I need. And it's a good way to show off my 4k monitor :)

There were 2,700 MOCs added during 2017 which is almost double what was added in 2016! I believe this is largely due to the improved submission process that came with Rebrickable v3, making it easier than ever for designers to submit their creations.

We now have over 7,200 MOCs in the database, all of which have building instructions and parts lists, all of which are analyzed when you run a Build Search.

Of the MOCs added in 2017, the ones with the most likes are below.

Around the middle of 2017, I added the ability to upload photos of MOCs you have built. It has proven to be a very popular feature and one that I will probably expand on during 2018.

There were 1,174 MOC photos uploaded and approved.

According to the database of > 8 million owned LEGO sets, the current most owned sets of all time are as follows. I admit there may be a slight bias towards Technic in Rebrickable's user base!

If we just look at sets from 2017, the most popular ones are:

If we just look at the new sets added after Christmas day, we can see the most popular presents!

One of the new features introduced with v3 this year are badges. There are currently 77,000 badges awarded to users.

There is a single user leading the pack with 20 out of 25 possible badges with several others close behind on 19.

These are the badges ranked by the number of users who have them.

There are currently two badges that no-one has been awarded yet:

Along with Badges, we introduced the concept of Levels. These serve two purposes - to indicate how active a user is on Rebrickable, and to provide a simple threshold for activating certain features which require some familiarity with how Rebrickable runs (e.g. submitting set inventories).

We already have one very active user maxed out at Level 10. I myself am only a 9 :(

I am considering re-calculating the Levels system for 2018 and making the maximum 50 or 100 instead of 10, to better show your progress and make getting to the next level a little easier.

Everyone has been super busy this year submitting new content, and keeping the admin team even busier approving and handling change requests:

With Rebrickable v3, I introduced the ability for part photos to be used when the usual part rendering isn't available. I was afraid the effort required to get enough photos to be useful was too great, but during 2017 there were a whopping 4,800 photos uploaded.

You can help contribute at your Missing Images page which shows the parts you have in your collection that currently need images.

Some of the main events that took place in 2017 for Rebrickable.

Rebrickable v3 went live. This was a complete rewrite of the entire site and database design which brought many improvements, and of course many of their own issues. We've come a long way this year in getting it to where it is, so thank you for your patience!

Pro/Designer Plans. I implemented the Plans feature in an effort to fund the site a bit better and hopefully one day get rid of the reliance on ads and affiliates to pay the bills. A big thank you to everyone who has upgraded! It is making a difference. While it's not enough to remove ads yet, it has been enough to upgrade the hardware to a level that can support current traffic much better.

MOCPlans shutdown. With the MOCPlans website about to disappear, we rescued thousands of purchases and made them available for download at Rebrickable. At the same time, a new Hosted Premium MOCs feature was introduced which allows MOC designers to sell their instructions directly on Rebrickable, making buying/selling much easier for everyone. In only two months, hundreds of these Premium MOCs have been sold, earning the designers thousands of dollars :) See the blog post for more details.

As usual, there were hundreds of other small enhancements and fixes along the way. We will continue to improve Rebrickable throughout 2018 and beyond. If you have any suggestions for improvements, please submit them in the Suggestions Forum so people can vote on them.